Guide to RV Fridges and Coolers

Fridges in RVs — motorhomes, caravans, fifth wheelers and camper trailers — are taken for granted these days. If you’ve been around a while, you’ll remember when an icebox cooler was the only type of refrigeration you could get in a caravan or camper.

Today, a fridge is a vital part of RV travel and even the smallest campers have one. It can be tricky figuring out which type of fridge is best for your RV and your style of camping. Refrigeration becomes complicated as the unit has to:

In this article, we’ll give you the cool facts on different cooling systems and how they work. Absorption (also known as three-way) and compressor are the most common types, while eutectic and thermoelectric are also available in New Zealand. Sounds like a mouthful so let’s delve into what each means.

What are the different types of RV fridges?

Some small campers or off-road vehicles may be kitted out with a thermoelectric or eutectic cooler. Motorhome fridges can run off these three energy sources:

Upright-style fridges are most common in motorhomes and larger caravans, while many campervans and smaller caravans have more compact under-bench fridges.

Absorption fridge technology has been around for about a hundred years — with the first models being commercialised way back in 1920.

Absorption fridges, also known as two-way or three-way fridges, are very common in all types of RVs. They’re usually in the upright style. The term 'three-way' comes from the fact that the fridge can operate on three different energy sources — 240V mains power, 12V and LPG.

If absorption and three-way fridges are new to you, take a look at our glossary of useful terms to know when buying a motorhome.

How an Absorption Fridge Works 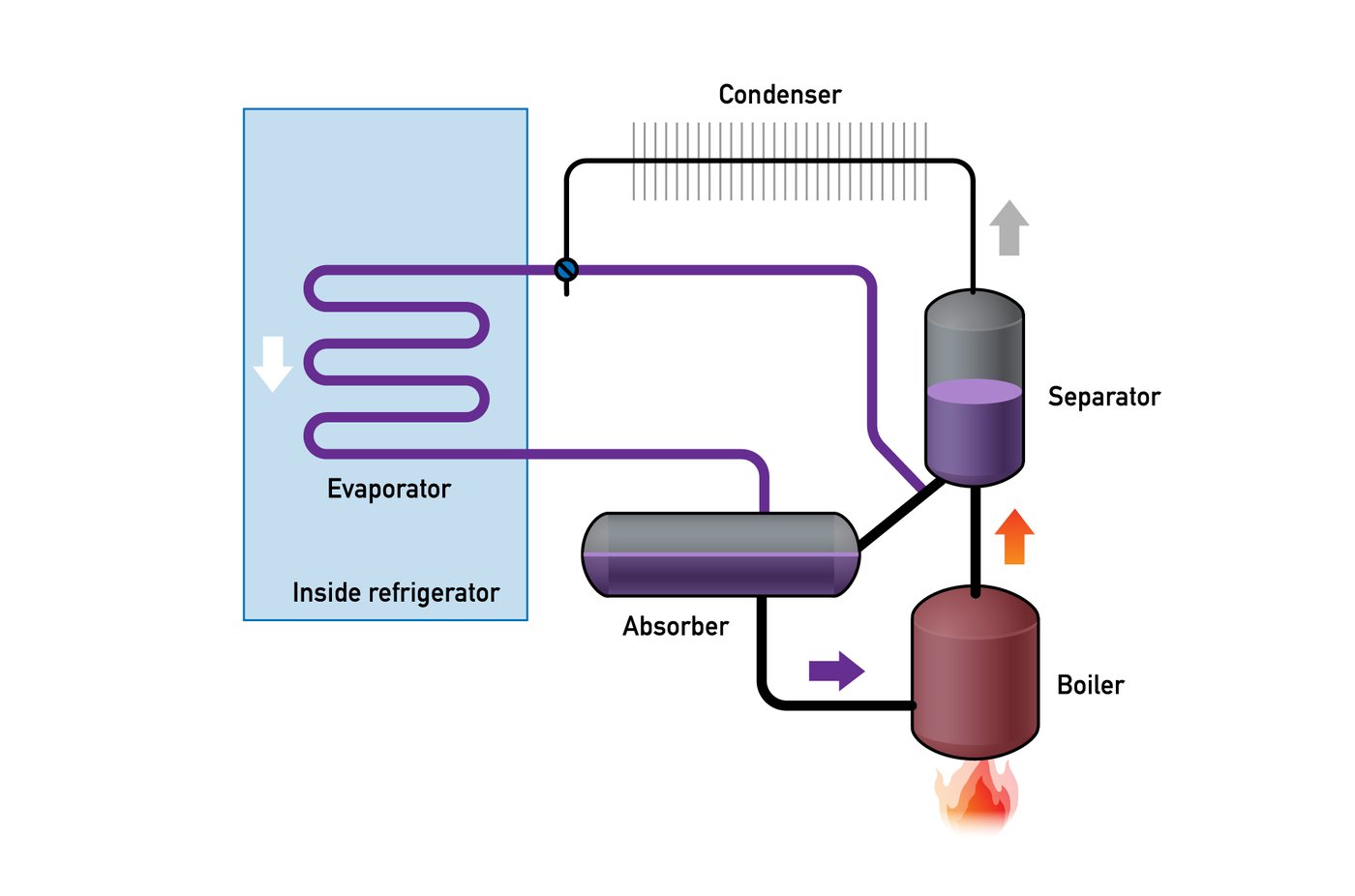 How an absorption fridge works

An absorption fridge works by heating up a strong ammonia/water solution until it boils. From there, the:

The hydrogen isn’t absorbed, but when separated it returns to the evaporator. The entire cycle then repeats itself.

Compressor fridges have few components and the operating principles behind them are simple enough. As the name suggests, there’s a compressor plus:

How a Compressor Fridge Works

How a compressor fridge works

The compressor pressurises the refrigerant gas through fan-cooled condenser coils in the open air. From there, the:

This lowers the temperature of the contents and warms the gas, which then passes through the compressor and the cycle continues.

The process of compression and evaporation continues until the fridge temperature reaches its set point. The compressor then only operates when required.

Compressor fridges are available in a number of styles – upright, chest and drawer. Although uncommon, the drawer type is handy for external use in a motorhome or caravan, especially for drinks. The one below is incorporated in an outdoor kitchen in an off-road caravan. 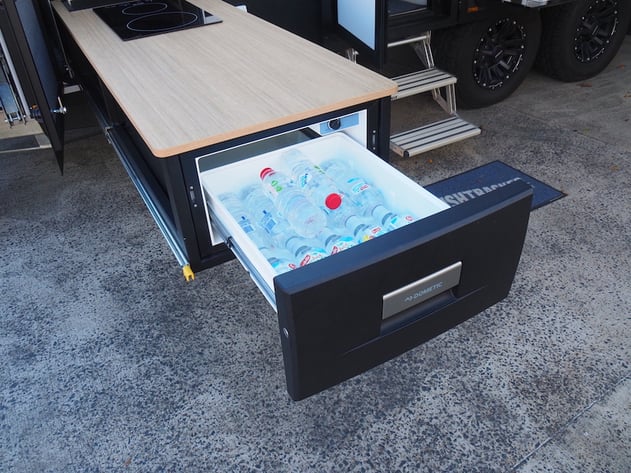 Example of a drawer fridge

Thermoelectric coolers are compact and portable making them increasingly popular. While they’re a very handy drink or picnic cooler, they’re not true fridges — at least not in their current stage of development.

Thermoelectric coolers operate by the Peltier effect — the electric current from A to B.

When a DC electric current is passed through your device it brings heat from one side to the other, so that one side gets cooler and the other hotter. Whilst that sounds good, thermoelectric coolers are rated to achieve a cooling effect in relation to the ambient temperature. Therefore, they can’t act in the same way that a fridge does.

Thermoelectric coolers are capable of temperatures about 20℃ below the ambient temperature. For example, if:

They don’t have any moving parts but some do have a fan.

How do Thermoelectric Coolers Perform?

For performance, thermoelectric coolers are in their element when you need a small portable cooler that can go almost anywhere and keep most non-perishables cool. However, you’ll definitely need a fridge to chill milk, cheese and meat.

While they’re not suited to keeping perishables cold, thermoelectric coolers have the added bonus of being able to heat food and drinks up to around 65℃.

Eutectic fridges are less common in the RV scene, but are still worth a mention. They use a compressor refrigeration cycle but are constructed differently to compressor fridges.

The evaporator coils, which cool your fridge’s interior, are in a tank that surrounds your food compartment, rather than inside it. This tank contains a liquid that freezes during the refrigeration cycle — cooling the contents of your food storage area.

Once the eutectic liquid freezes, it’ll keep your fridge’s contents cool for an extended period. And that’s one of its advantages — it gets around the noise problem of a compressor cutting in and out overnight.

Which type of RV fridge is better: Absorption or Compressor?

The type of fridge a caravan or motorhome has is likely to be way down your list of must-haves. But if you’re kitting out your own campervan or caravan, or it’s time to replace your existing fridge, you’ll want to know what type is best for you.

Absorption (three-way) and compressor fridges are the most common kinds in RVs in New Zealand, so we’ll weigh up the advantages and disadvantages of each.

As highlighted above, absorption fridges can use three different energy sources — mains power, 12V battery power and LPG. Mains power (240V) and LPG are the most efficient. You can hook up to mains in a campground and use LPG when you’re off-the-grid.

Neither of these power sources work when you’re on the road, as gas cylinders must be turned off when driving (and when on a ferry). So motorhomes have a backup 12V power supply to power your fridge and some other functions when mains power or LPG aren’t available.

Absorption fridges aren’t very efficient when running on 12V compared to compressor fridges, so you may find it drains your house battery quickly. Some fridges have an auto energy selector which automatically detects what energy source you are connected to but others need to be manually switched between sources.

They also don’t cope with high ambient temperatures like those found in Northern Australia. New Zealand temperatures should be fine but check for a T (Tropical) rating when you’re buying a new fridge.

Compressor fridges can operate from either 240V mains power or 12V battery power. Following a day’s driving, your 12V compressor refrigerator should easily be able to operate overnight without draining your standard 100Ah battery.

Turning down the thermostat will minimise compressor cycles and therefore reduce your energy consumption.

Some compressor fridges can be a little noisy, especially in comparison to an absorption fridge. If you’re a light sleeper, you may find that the noise from the compressor kicking in may disrupt your sleep, but that depends on the model.

How do I keep my RV fridge running efficiently?

Motorhome fridges look after themselves but there are a few simple things you can keep in mind to operate them more efficiently.

The most common compressor and absorption fridges available in New Zealand (Dometic and Thetford) have been well supported by local agents for many years. Dometic also supports Waeco portable compressor fridges.

You can also buy Vitrifrigo, Isotherm and Webasto/IndelB brand fridges from a number of RV and marine suppliers. The suppliers we contacted confirmed that servicing and spare parts are available in New Zealand for these brands.

Before you buy a new fridge, it’s worth checking with the supplier whether the fridge is serviced and supported in New Zealand.

All Wilderness motorhomes come ready-to-cool with a three-way fridge that will run on mains, the 12V house battery and LPG while freedom camping.

Check our comprehensive glossary of useful terms to know when buying a motorhome.